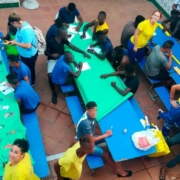 The massive arrival of immigrants in small boats to the Andalusian coast in recent years has put all the social entities involved in this phenomenon on alert, among them the SAMU Foundation, which currently hosts about 560 minors who have arrived clandestinely to Spain without being accompanied by an adult. These are distributed among the 16 different centers available to the organization. On the one hand, the so-called Temporary Emergency Accommodation Units or Immediate Care centers, and, on the other, the Basic Residential Care centers. Most of them come from Morocco, although there are also children from Guinea, Senegal, Mali and Ivory Coast.

Irregular immigration has more than doubled so far this year compared to the figures of 2017, which were alarming then. Spain is already the main access route to Europe, surpassing Italy. Up to the 15th of July, the irregular immigrants who had entered this year in Spain, mostly by sea and on the coast of Andalusia, already numbered 15,686, according to data from the Ministry of the Interior —the European agency Frontex raises this to 18,016 for the same period—, 114% more than in 2017, when the figure had already increased by 170%.

This year, the SAMU Foundation, by order of the Board, has opened, as of yet, 11 new resources aimed at this group. Two of them are Basic Residential Care centers, and the rest are Immediate Care centers.

In terms of Basic Residential Care resources, which allow minors to remain at the center until children reach legal adulthood, SAMU has three resources in Seville, Granada and Cadiz. The last of them was set up in El Bosque, in the province of Cádiz, at the end of May. It was born from a need of the General Direction of Childhood and Families of the Board to address the needs of minors who arrived in Spain during the year 2017 and were still being cared for in Immediate Care centers. There are 13 people who work here, among them psychologists, social workers, educators, teachers, and edudational technical assistants.

“The key objective of the Basic Residential Care centers is to insert these children into society. Our role is one of social and professional guidance that starts with the task of documenting the minors, placing them in educational centers or in different courses and working with them towards their future emancipation,” indicates Nicolas Torres, director of SAMU minors.

All these resources add up to two more instruments in Motril (Granada), a Center of Social/ Professional Orientation, opened in 2013, and a floor for children who have been under the guardianship of SAMU and who have already reached legal age.