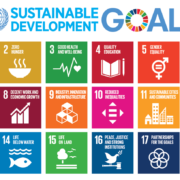 The international summits on climate change have manifested an unquestionable truth: The world as we know it is in danger. Likewise, there is a consensus on the scientific community about this threat. We have seen the response from citizens, institutions and the private sector, all shifting towards protecting the space were we live. SAMU, through its sustainability department, is specifically focusing on this objective.

The organization focuses on caring for the places where it operates and reducing footprint in their actions. Under the mandate of the Sustainable Development Goals (SDGs) from the United Nation, SAMU has undertaken a new project, Eco-SAMU. Under this project, all SAMU centers are directly responsible for the collection of residues in their areas of work and impact, working not only with individuals, but with public and private partners.

Of the most important objectives of this project, as explained by Rocio Alvarez, Director of SAMU’s Sustainability Department,  is to contribute to the improvement of the environment starting with small actions, reducing the  environmental impact of its actions, creating greater alliances to protect the planet, and creating awareness on the need to protect the environment.

With the last thing in mind, SAMU is conducting workshops along with activities to collect waste around the different SAMU Centers.

The minors in the Centro de Inserción Sociolaboral (ISL) in Granada, were the first to participate in the project, collecting waste around the beach areas. They have also been joined by the center in El Bosque, where the community conducted a series of cleanups around the Majacete River, the Sierra de Cadiz as well as the Santa Teresa residence in Toledo.

The latest group to join the Eco-SAMU initiatives are the users and workers from the SAMU Wellness center, by collecting plastic trash around the center in Seville.