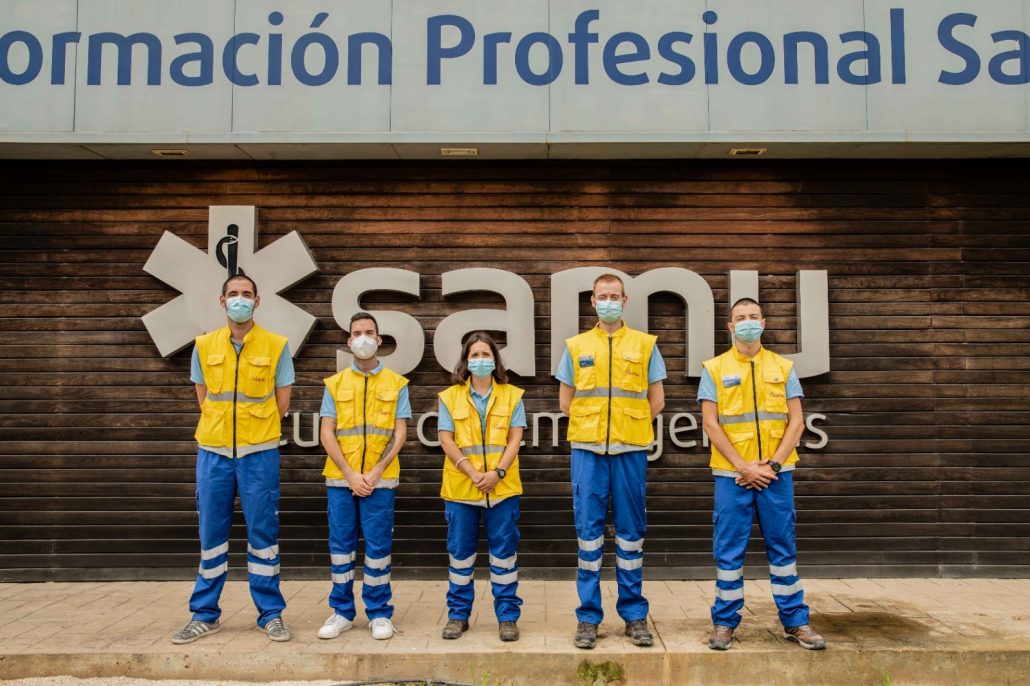 After a humanitarian cooperation mission, in many occasions the return to routine comes faster than one can process the experience. But all the memories, experiences and lessons remain in the conscience waiting to be understood. Twenty days after their return, five of the professionals who traveled to San Salvador for SAMU’s 28 day humanitarian assistance mission got together to talk about the experience.

Some of these volunteers had not seen each other upon their return to Seville, after the welcoming ceremony organized by Escuela SAMU. Upon arrival, they give each other a warm but socially distance hello. Covid-19 continues to be present and everyone is wearing a face mask. After a couple of pictures for our SAMU Magazine, the five volunteers sit in a circle inside one of Escuela SAMU’s classrooms. Everything is quiet. There is no rush or anyone to bother. In that moment Alejandro, María, Rubén, Ignacio y Roberto reflected upon their experiences.

The five volunteers learned about the humanitarian mission to El Salvador from the call to volunteers made by Grupo SAMU on social media and via different WhatsApp groups. They all submitted their application. Some of them had experience careing for Covid-19 patients in Seville. Ruben Izquierdo, 21 years old, had recently been part of the team at caring for elderly patients at Hotel Alcora, in San Juan de Azanalfareche, Seville. He worked as a nurse practitioner. Ignacio, an emergency technician, was part of the team in la Línea de la Concepción (Cádiz). “For me, this is a vocational job. I love the idea of helping and that also why I’m a red cross and proteccion civil volunteer.” Says Ignacio.

Roberto is a 4th year medical student and was working as a waiter in Mallorca when he was selected to be in the mission team. “I had excellent references of SAMU. I have friends that have already worked with the organization and I didn’t think it twice. I left my job and took the first flight. Next day I was already being trained at Escuela SAMU. It all happened too fast but I made all the decisions with the support of my mother.”

María Martín Díaz, a nurse and graduate of the Masters in Nursing for Urgent Care, Catastrophes and Humanitarian Action from Escuela SAMY and Fundación CEU San Pablo Andalucía (2018-2020), also left her job to travel to El Salvador. In her case, she had a contract at Hospital Osuna until the 31 of August. “I left my job knowing that I was going to be penalized and wont be called back for a while. They are now renewing contracts until December and I’m missing out. But I have no regrets. I wanted to go on a humanitarian mission. It was something I always wanted to do but didn’t have a chance in the past.”

Alejandro is the youngest in our team. He is an emergency services technician and 18 years old. “When I decided to go to El Salvador I only had the support of my father, who is a firefighter and likes emergency assistance. My mother, grandfather and my sister were not excited with the idea. They were afraid of me going on a humanitarian mission at such a young age, but I decided to go ahead”.

They all agree that the nature of this mission is different from other SAMU Missions. This was not an emergency services mission, but rather a training and support one. The team carried out a training plant in assistance, biosecurity and logistics to improve the effectiveness of the local teams. There was also a big emphasis on hands on training for bedside assistance and to the managerial positions. This knowledge transfer has actually been SAMU’s biggest legacy from their work at Hospital San Salvador.

“The structure and way of working was also different. Here we have the doctors, nurses, auxiliaries and technicians, all with different roles and functions. There we found many specializations within a specific role, making the work assignments harder to define’’ continues Maria “On the other hand, the experience of the professionals at the hospital in regards with Covid-19 and in the ICU with multiple patients at a time was limited.”

Alejandro recognizes that one of the most shocking aspects of the mission was the number of deaths. “I had never seen anyone die” says the 18 year old. “ Each country and hospital has its own rules and you have to adapt. But that doesn’t take away the frustration and feeling of helplessness when something is done different from what you have learned and think it’s the appropriate way. There were a lot of young cases that had a big impact on me”

“This pandemic has taken our profession to a new limit. To many, this crisis is too impactful. Many just want to finish their shift and go home. They are overwhelmed and tired and it is completely understandable” Says Maria Martin.

“ We also admire the flexibility and capacity of change. Their willingness to improve their procedures. All of this makes us realize the great health and sanitation system that we have in Spain” Says Roberto Millares, Medical student. “On the other hand, we found that they had the right quality and quantity of resources, where all that was needed was the optimization on procedures and use of these resources”

Aside from the professional experience, one of the most impactful aspects of the mission was the overwhelming welcoming from the national government and the people of El Salvador in general.

“Upon arrival to the airport we were warned by other passengers to expect the press to be at the airport. We thought that was an exaggeration, but as we stepped off the place and saw the government representatives we were shocked. We had a ministerial welcome” Says Roberto Millares. “As our mission director says, there were times that we were treated as rock stars and others as Madre Teresa de Calcuta” continues Maria.

They all agree in the wonderful and warm treatment on part of the people of El Salvador. “They have taken care of us since day one. We aways had a security escort but almost didn’t notice” says Ignacio. “People stopped us on the street to say hi and the patents were very nice and thankful”

The group also remembers the great harmony within the group of SAMU Volunteers. “We had a great bond. I was not expecting it. From my previous experiences and similar deployments I was not expecting such a great sense of community. What we experienced was a great sense of comradery”  Explains Ruben Izquierdo. “If anyone had a problem or a bad day, we would lift each other up, looking for a way to make everyone feel better. We were a family”.

In every step of the way, these five volunteers and the rest of the team felt the strong support of the mission team back home. Although not in country, there was a group of SAMU professionals aiding them from Seville, covering their needs and keeping communications with families. “They kept track of all all the important date, birthdays and other celebrations. This really got us through the most difficult moments” Asserts Maria.

“Mi mother said that she felt more connected and at ease with me in El Salvador that if I was in Seville or Mallorca, because of all the information and details she received from the SAMU Team. I am not the best at giving her a call” adds Roberto. “Although the team in Seville was foreign to us, they knew every details of our mission. They were the great big brother”. Adds Ignacio.

When asked if they will sign up for a future mission, the answer was an unanimous yes. “I would have stayed longer, with some adjustments”  says Maria. “For example, adjusting our work schedules. During out entire mission, we only had one day off. We were going straight from the hospital to the hotel and had half an hour to eat. We knew exactly what we were signing up, but that rate was only viable for one month.”

“We have lived the spirit of SAMU in its purest form, even though some of our us were new the organization”, concludes Roberto. “We have learned to manage uncertainty and our own shortcomings. That the true spirit of SAMU, but you don’t feel it until you live it”.