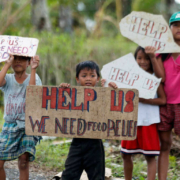 The third contingent of Fundacion Samu sent to the Philippines came to value a man who as volunteers of the NGO commented Gualandi Volunteer Service Programme, working in the area (San Remigio, Cebu), had 16 subject tied to a tree and unaware of the motif.

When the team arrived to the area to assess it, this man was in the middle of the jungle with a foot trapped between two logs that allowed him to move but not be straight. The physical examination was normal and noted that he was careful as the mother would wash him and gave him water and rice.

After assessing the man named Ben, volunteers met with the family to find out why Ben’s behavior. The story told by family and behaviors Ben was diagnosed with schizophrenia and was prescribed a treatment that the NGO will provide.

He was taken to hospital where he spent the night and was discharged with medication. He is currently with his family at home that volunteers have rebuilt since it was damaged by the typhoon.

Maria Dolores Romero, SAMU psychiatrist, says that “the reason why the family was tied by ignorance and fear of the attitude that was showing Ben. In countries like the Philippines, especially in disadvantaged areas, there is no adequate mental health care and a significant lack of knowledge about mental illnesses that make people with a mental disorder are in inhuman conditions.” 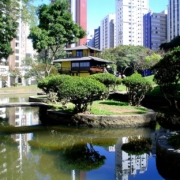 Samu International in association with The Chains Group held the day 6-8 February in Curitiba: “The International Meeting on Crisis and Disaster Management”.

The aim is to encourage debate about the importance of prior organization to crises and disasters. This meeting will feature lectures, theoretical and practical courses, also will be launched in the Brazilian country in the second edition of the book by Dr. Carlos Alvarez Leiva: “Atendimento de Saúde em to Multiple Frames vitimas and Disasters”.

Dr. Alvarez Leiva made two free and open to the public about the book and the management structure of global crisis brought to Brazil for the event talks.

The course content will include: Risk Management, a systematic view, introduction to crisis management, health teams in events and disasters, the role of universities in scientific research on disasters and major events, disaster medicine, hospital and disasters and crisis cabinet and SCI.

About the World Cup, the president of Samu stressed the ability to mobilize the Brazilian people. “The people of this country is prestativa solidarity and an event with these proportions is the opportunity to improve the care and services they need to integrate and prioritize an organization and efficient logistics.